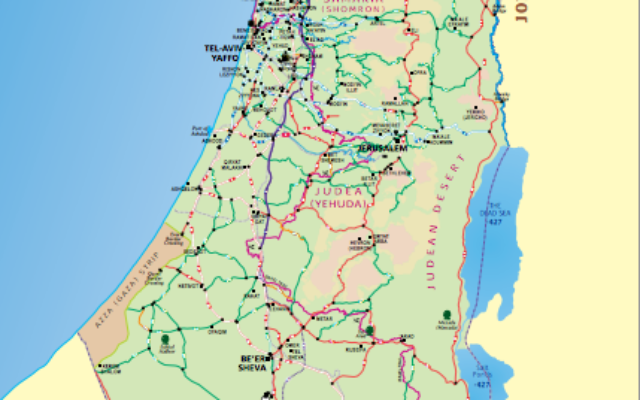 A Israeli government tourist brochure did not “misleadingly imply” that the West Bank and Golan Heights are internationally recognised as part of Israel, the Advertising Standards Authority has ruled.

The brochure, distributed at a Christian exhibition event in May and hosted on the tourist board’s website in August, was designed to attract religious tourists considering pilgrimages to Israel – but its inclusion of a simplified map led to complaints to the regulator.

The Israeli Government Tourist Office (IGTO) had contested the advert had been “non-partisan” and “showed a fair and balanced view of the historical, religious and cultural activities available in Israel and the surrounding areas”.

Areas in the north and south of the West Bank were labelled “SAMARIA” and “JUDEAN DESERT” respectively, as per their Biblical names.

The Israeli-occupied Golan Heights region of Syria was marked “GOLAN”, and was coloured to reflect its elevation.

The map also marked areas of special significance to Christians including Bethlehem, Nazareth, Jericho, and the Golan Heights – as well as the archaic geographic terms for the north and south of the West Bank.

In its response to the complaint, the IGTO argued those using the map would be aware “the status of the territories in question was the subject of international dispute”.

The Advertising Standards Authority – who in March banned an IGTO ad for implying Jerusalem’s Old City is part of Israel – chose not to uphold the complaint.

Its assessment read: “We considered that the average consumer who sought out information on IGTO’s website about visiting Israel as a tourist, and who under the Code was assumed to be reasonably well-informed, observant and circumspect, was likely to be aware that the status of some of the territories in question was the subject of much international dispute, and that that could have implications on travel and security procedures in those areas.

“We considered that those consumers for whom the disputed status of the territories was a significant issue that would affect their decision to visit were also likely to be aware of the dispute and were therefore also unlikely to be misled into taking a transactional decision they otherwise would not have taken.

“We therefore concluded the ads did not breach the Code.”

The IGTO had argued it would be “unduly onerous and inappropriate” for its tourism adverts to include “political statements” when referring to disputed territories.

Following the decision, they told Jewish News: “The IGTO is pleased the ASA’s decision was positive for us, the map in question meets with the UK advertising standards which is something we adhere to.  The decision is a clear message to organisations like the BDS who campaign against Israel, that their effort to deter and dissuade will be in vain.  We work tirelessly to promote Israel as a holiday destination producing many brochures and travel aids to inspire and help visitors make the most of each visit to Israel.  Our visitors are well informed individuals and are aware that different areas may hold different status on an international level.”

A similar case in 2009 saw a tourism poster which displayed Gaza, the West Bank and Golan Heights as part of Israel banned by the ASA following complaints from the Palestine Solidarity Campaign.