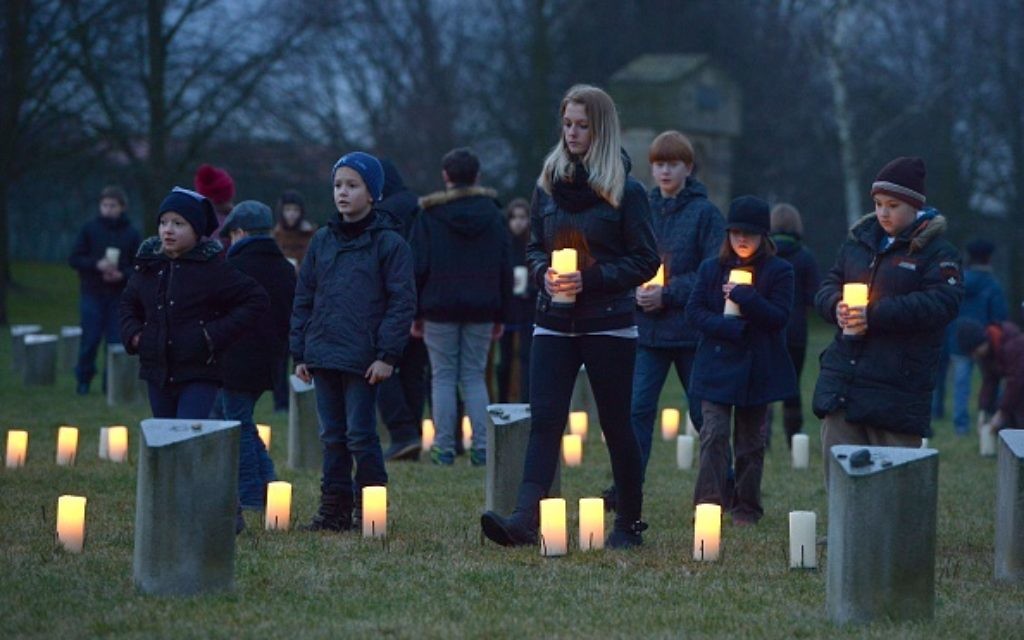 Children bring candles to at a Jewish cemetery at the former Terezin Nazi concentration camp on January 27, 2015, in Terezin (Theresiendstadt ) during the ceremony to mark the 70th anniversary of the liberation of the former Nazi concentration camp Auschwitz-Birkenau in Oswiecim, Poland. AFP PHOTO / MICHAL CIZEK (Photo credit should read MICHAL CIZEK/AFP/Getty Images)

By Joe Millis at Terezin

There are no remnants of crematoria at Terezin.

No gas chambers, either, to remind us of the horrors of the Holocaust.

No rows of forlorn huts, no piles of hair or shoes to point accusingly at a world that didn’t care.

In some ways, Terezin – or, as it was renamed by the Germans, Theresienstadt – is far more sinister than the ruins of Auschwitz-Birkenau or the empty spaces of Treblinka.

This quiet hamlet named after a fortress, 65km north of Prague, is the model village that the Führer, in his magnanimity, gave to the Jews in 1940.

There’s even newsreel of the era, showing middle-aged and elderly Jews enjoying a show or a concert or reading a book.

Children are shown playing in a spielplatz – a playground – like their contemporaries all over the world.

All was good on planet Terezin/ Theresienstadt.

But it was a ruse, a cynical ploy for home and foreign consumption, to cover up what was in effect a concentration camp.

The Red Cross was allowed to visit and give its seal of approval. But when the cameras left, tens of thousands of people died there, some killed outright and others dying of malnutrition and disease.

More than 150,000 other people, including tens of thousands of children, were held there for months or years, before being sent by rail transports to their death in Auschwitz or Treblinka.

As the world marked the 70th anniversary of the liberation of Auschwitz by the Red Army on 27 January – the date designated Holocaust Memorial Day by the United Nations – at the site of the Theresienstadt concentration camp, several dozen children lay candles in the shape of a Star of David over the graves of their slain relatives.

At the Terezin ceremony, organised by the European Jewish Congress as part of its Let My People Live forum in Prague, former Israeli Chief Rabbi Yisrael Meir Lau – himself as survivor – said remembrance was “the best evidence, the best proof that there is a chance for a better life and future”.

Oscar-winning actor Sir Ben Kingsley was at the event to recite a poem written by one of the children who was transported to the camp. Very few survivors remain to tell of the horrors, and their number is dwindling rapidly, so, inevitably, the focus is on the future. Sir David Amess, the Conservative MP for Southend who was at the event representing the Speaker, John Bercow, told Jewish News that Winston Churchill was right when he said “those who forget the past are condemned to repeat it”.

The MP, who was on his first visit to Terezin, added: “We take it for granted that everyone knows what happened here, but when you talk to young people they just can’t believe what happened. We must learn about the terrible things that took place here to ensure they don’t happen again.” Testimony was given by the child of Terezin and Auschwitz survivors, Tomáš Kraus, a leader of the Czech community. Kraus, the son of Czech journalist František Kraus, a friend of Franz Kafka, described there being “two types of survivors”.

“One type is keeping it silent, these people do not want to mention anything which is even distantly related to their history,” he explained. “And then there are the others, who want to share everything, they want to scream out, they’re witnesses, and they want to warn the world. Never again was their mantra,” he continued. “Both types I knew. The first was my mother. The second was my father.”

Kraus paid tribute to all victims of “terror and hate” but cautioned that in the present political climate, the legacy of the trailblazing witnesses to the Holocaust may be disappearing. “What happened to ‘never again’? Are we, the next generation, and the generation that will follow, are we able to fulfil their legacy?”

Just before reciting kaddish, former Chief Rabbi Lau urged the world to combat terror and hatred, but stopped short of a fatalistic assessment. He pointed to the mass rally in Paris after the attack on the Charlie Hebdo satirical magazine and HyperCacher kosher supermarket as a positive development. “This march in Paris two weeks ago never happened in the 40s. Leaders of states marching against terror, against violence, against bloodshed. Where was such a march?” he asked.

He described a recent encounter in Seattle with General Leo Hymas, the man who liberated him from Buchenwald, and who came to apologise 70 years later for coming “too late.” “The past you cannot change, but the future — make it better,” he said. “Don’t be too late.”