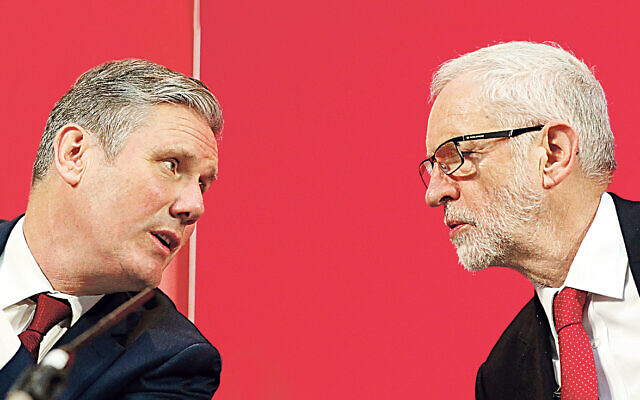 Nearly two-thirds of non-Labour voters who admitted they were considering backing Keir Starmer’s party said they were more likely to do so if Jeremy Corbyn was expelled, according to new poll.

In a survey conducted for the Labour Uncut news site, 60 percent of those who had previously supported other parties, said they would be more likely to vote for Starmer if the former leader was booted out for failing to apologise over his comments relating to the EHRC report into antisemitism.

Just 19 percent of those considering supporting Labour said they would be less likely to back the party were Corbyn expelled for his remarks that the extent of antisemitism was “dramatically over-stated.”

In research conducted by Yonder, (the polling company previously known as Populas) it emerged that one in four of those polled (26 percent) said they would consider voting for Labour at the next election, having previously backed other parties.

But of this group, 66 percent said they were still worried about the influence of Corbynites in the party.

Two-thirds of those polled agreed with the statement: “I didn’t want Jeremy Corbyn to be Prime Minister and worry that people like him are still too influential in Labour.”

Responding to the results of the poll, Atul Hatwal, editor of Labour Uncut, told Jewish News “An opportunity is emerging for Keir Starmer. With 1 in 4 non-Labour voters open to switching to Labour at the next election there’s a path to government opening for Labour.

“But the polling shows that voters considering Labour want a decisive break from the Corbyn era and the stain of antisemitism to be expunged.

“How Keir Starmer deals with Jeremy Corbyn and his refusal to apologise over antisemitism will be critical. The opinion of Labour voters and those thinking about voting Labour is clear: no apology means Corbyn has to be booted out of Labour.”