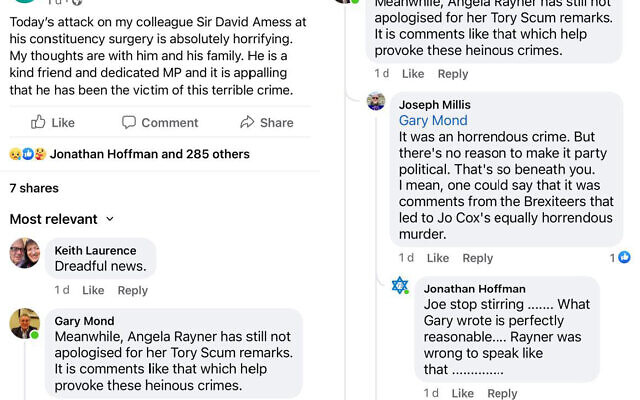 Board of Deputies Senior Vice President Gary Mond is being accused of bringing the communal organisation “into disrepute”, with a social media post that linked Labour deputy leader’s to the death of the Conservative MP Sir David Amess.

Jewish News has learned that a group of around 40 Deputies are to going to press Board President Marie van der Zyl into taking action against Mond, after he posted an attack on Angela Rayner on the public Facebook page of Chipping Barnet MP Theresa Villiers.

The group of Deputies will demand that the matter is discussed at the next Board plenary – with several openly calling for Mond, who chairs the Board’s Communities and Education Division, to resign.

One Deputy said: “By seeking to link the heinous murder of David Amess to the deputy leader of the Labour Party, Gary Mond has brought the Board of Deputies into disrepute.

“How can the Board expect to have a productive working relationship with the Labour Party when its Senior Vice President makes comments like this?”

Another Deputy said there was “palpable anger” amongst a group of around 40 Deputies.

“This is not the first time there have been issues with Gary Mond’s inflammatory conduct,” they added.

Villiers wrote that the Southend West MP had been a “kind friend” who had been “the victim of this terrible crime”. 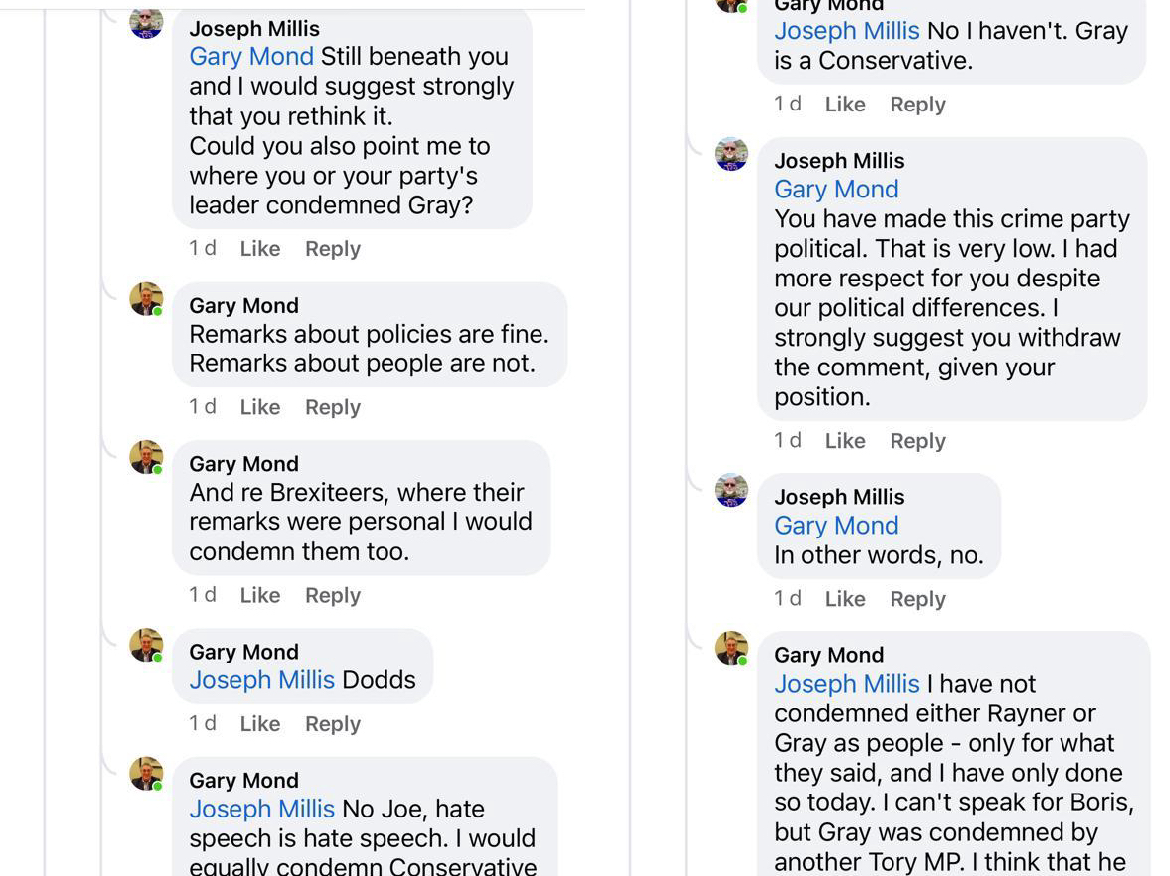 But in a follow-up posting on the Villiers public Facebook page, Gary Mond, a vice-president at the Board and the JNF representative, wrote: “Meanwhile, Angela Rayner has still not apologised for her Tory scum remarks. It is comments like that which help provoke these heinous crimes.”

Mond’s posts immediately sparked an ugly dispute involving the deputy Joseph Millis, who condemned Mond’s post which he said attempted to make the death of the MP “party political”.

“It has not gone unnoticed that this whole ugly social media row took place on Shabbat,” another Deputy told Jewish News on Tuesday.

“Nobody involved in it emerges with any credit.”

But the group of 40 Deputies will now urge the President to address the matter in her statement ahead of the next Board plenary.

On Tuesday evening Mond issued a lengthy apology to Deputies for his actions.

He said:”I writing in respect of my post on the Facebook page of Theresa Villiers MP which has caused much consternation and condemnation among some Deputies and others in the Jewish community.

“It was wrong of me to post my views on the comments of Angela Rayner on the Facebook page of an MP, and also very wrong of me to write the post on Shabbat.

“I apologise unreservedly for these actions and, going forward, I will not be making controversial statements on an MP’s post nor posting on Shabbat again.

“I emphasise that there was no intention on my part to directly, or even indirectly, link Angela Rayner’s “Tory Scum” comments with the horrific murder of Sir David Amess.

“What I was trying to do was to urge against a coarseness in political commentary which strays from legitimate debate into blanket insults of one’s political opponents.

“I recognise that the way I sought to do this was clumsy and inappropriate and I apologise profoundly if my words led anyone to believe that I was blaming Angela Rayner in any way at all for this heinous murder.”

Deputy Joe Millis said: “I don’t think this complaint helps anybody and certainly not the Board. It’s best that we all learn our lessons from this and not inflame an already fragile situation.”