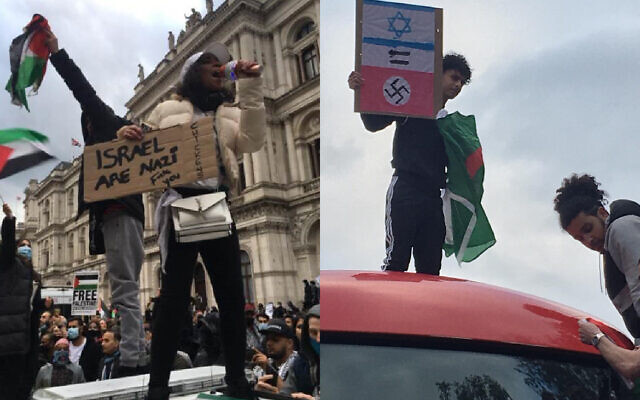 There has been a 250 percent increase in antisemitic incidents reported since the start of the recent confrontations between Israel and the Palestinians.

Altercations outside shuls, verbal abuse directed at Jewish people on the street and hateful social media posts, are among the reported incidents since the start of the violence last week.

The Community Security Trust said there has been a sharp spike in hatred calling it “depressingly familiar and completely inexcusable”.

The charity, which is responsible for securing communal institutions like shuls and schools, said from 8-12 May, it recorded 25 incidents , compared to seven in the five days prior to the escalation, an increase of 250 percent.

It said incidents included a verbal altercation outside a synagogue directly referring to events in Israel, cars driving through Jewish areas of London and Manchester with occupants shouting abuse related to the situation at Jewish people on the street, and a swatch of antisemitic content on social media.

CST also highlighted a number of individuals at London’s Tuesday protest, comparing Israel to Nazism, including one standing on the top of a police car.

Messges were also sent to Jewish student society at UK universities, flagged up by the Union of Jewish Students, and an antisemitic email was sent to senior Jewish communal leaders with language that the Nazis should “HAVE GASSED ALL OF YOU MONEY GRABBING YID BASTARDS”.

UJS is disgusted that Jewish students and societies are being targeted with antisemitic abuse. Antisemitism is never the answer to increased hostilities in the Middle East and Jewish students must not be held to account for this. pic.twitter.com/lWhPBVLnLb

A spokesperson for CST said: “This increase in antisemitism in response to events in Israel is depressingly familiar and completely inexcusable. British Jews have the right to go about our lives free from abuse or threats. We strongly urge anyone who experiences or witnesses any antisemitism to report it to CST and the Police.”

This comes after a huge spike in antisemitic incidents was reported following the 2014 war between Israel and Hamas.