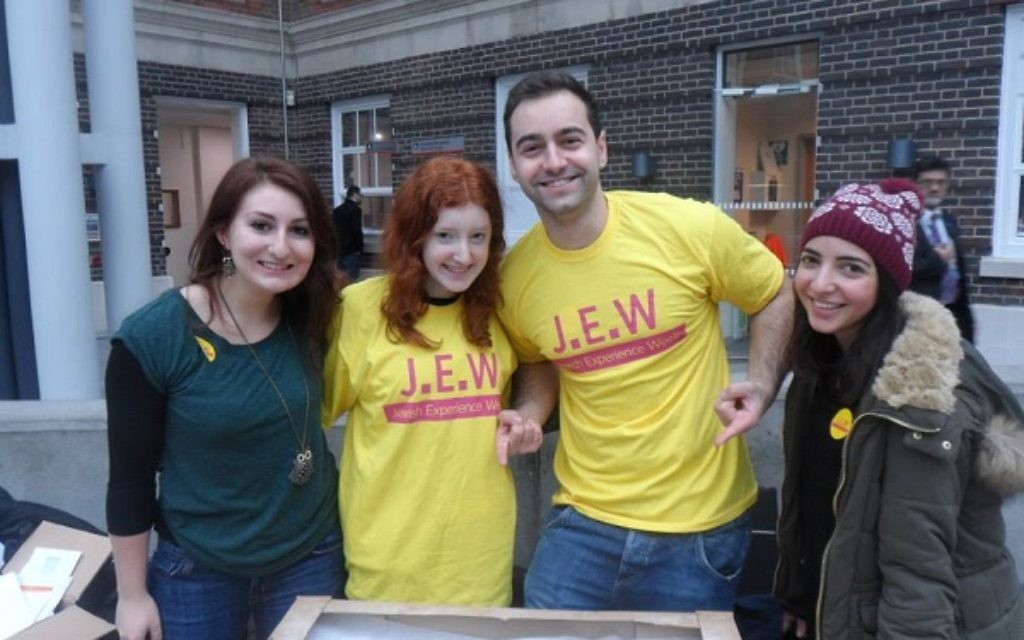 What an enlightening experience we had at Middlesex University…

Leanne and her team at J.E.W week at Middlesex University.

This November saw Jewish Experience Week at Middlesex and our aim was to try and change at least one person’s perception of our community on campus.

Our plan was to go around offering doughnuts to people as long as they asked us one question about Judaism or one fact in which they wanted to know about us. This was an resounding success! We had been a little sceptical about wearing the bright yellow “J.E.W” t-shirts on campus as we thought we might experience anti-Semitism, but we wore them anyway and to our amazement, we didn’t experience any.

I feel that the Jewish Experience Week has changed the way in which Jews are perceived by the students on campus – this guy came up to me and said: “Why do Jews hate Muslims and why do they think they are better than us?”

Thinking quickly I replied, “We do not hate Muslims”. Thoughts were encircling my mind as to what extent he had been taught this ideology? I said, “We are all equals in this world. It is the media’s portrayal which puts this aspect in a negative light”.

I encouraged him to bring his friends to the stall so that we could change their perception of us. I feel that we should focus on the similarities between the religions and how much we all have in common rather than the media’s portrayal of the differences between us. I hope I changed his perception – he left the stall happily with a doughnut!

The Jewish Experience week was ultimately the best thing we could have done on campus. The reaction of the students on campus was engaging and intriguing. They were coming up to us asking questions and even declining some free doughnuts! Since when does this happen?

The amount of engaging questions we were being asked was ranging from a multitude of different things from Sheitel’s and Payas to Kosher Food and Chanukah.

The amount that people already knew about our religion was informative. We chose to focus on the similarities, so when someone came up to us and asked “Why do Jews not eat pork?” we linked it to their religion to try and help people get a better understanding of the laws and customs in which we must abide by.

Moreover, we were asked, “Where did all the Jews go after there had been mass extermination by the Nazi’s and how did you manage to set up new lives?”.

The answer: we spread over to a diverse amount of countries ranging from America to England. Once the state of Israel had been established in 1948, many Jews felt the urge to settle in a Jewish homeland where they could be safe and secure away from all of the anti-Semitism that the Jews have faced over the decades.

One of my colleagues was asked “Are there really black Jews?”. To which he replied, “Yes, there have been black Jews dating back to Biblical times”.

One of the specific facts that we were informed of was the presence of Jewish heritage within many of the students’ families. The connection with all of the students was surprising as they appeared to want to engage with and embrace their Jewish culture.

Overall, we had a great time with the experience of Jewish Experience Week at Middlesex University. I felt proud to be part of a wider community and a part of this experience. We managed to change a lot of people’s perceptions on campus and hope that in the future, we can engage with more students on a greater scale!

We’ve got a lot of great and exciting new experiments to launch on campus this year. These range from BANJO (Bring a Non-Jew Over) to even getting the Islamic, Palestinian and Jewish Society to collaborate and come together for a meal to focus on the similarities between all of us on campus and to destroy the misunderstandings and friction between our communities over the decades.

Furthermore, we will also be giving out Hamentashen for Purim! We are hoping to engage with more students throughout the years that we are all at University and what a busy year we have ahead!

Jump on board if you are up for it!

To learn more about Middlesex J-Soc, you can contact them at mdxjsoc@gmail.com, find them on Facebook or visit the official UJS Middlesex J-Soc page.